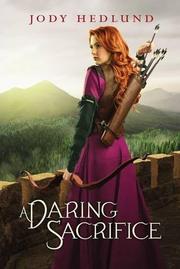 Prolific Hedlund is back with another tale of medieval romance, a sequel to An Uncertain Choice (2015).

Lady Juliana of Wessex lives in the forest, disguised as a boy, stealing to provide for the remnants of her father’s uprising against her vicious uncle. She doesn’t want to steal but must even though she is the rightful heir to the rich Wessex lands. But she goes too far when she tries to steal from the lord of the neighboring Goodrich lands and is injured in the process. Collin Goodrich has seen through her disguise and takes her to his castle to protect her. Their friendship builds and warms into a budding romance…until Collin’s sister invites the Wessex usurpers into the Goodrich home. Juliana’s no longer safe—and now neither is Collin. Hedlund’s light on historical detail and makes no apparent attempt to find a medieval voice to suit the 1390 English setting. Nevertheless, this narrative told from Juliana’s and Collin’s alternating points of view has engaging-enough characters and plenty of derring-do to entertain young romance enthusiasts.

Formulaic but fun for genre fans wanting a quick read.