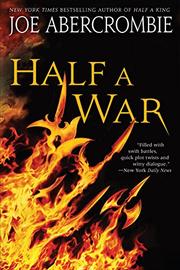 From the Shattered Sea series, volume 3

Previously we glimpsed the grand designs of Father Yarvi, now minister (counselor) to the Iron King Uthil of Gettland, aimed at preventing the High King and his wicked, conniving minister, Grandmother Wexen, from conquering the lands bordering the Shattered Sea and imposing worship of the One God upon unwilling subjects. Now, Princess Skara of Throvenland watches helplessly as Bright Yilling, the High King’s war leader, callously kills her grandfather King Fynn, burns his halls, and lays waste to her homeland after what the king thought was an agreement turned out to be a betrayal. Escaping by posing as a slave, Skara makes her way to Gettland, where King Uthil and Queen Laithlin confer with their ally, King Grom-gil-Gorm of Vansterland, and Yarvi. Bright Yilling, they learn, has left his fleet in the supposedly impregnable harbor of Bail’s Point. If, however, somebody is desperate enough to climb the cliffs, Skara knows a secret way into the fortress. Even such a daring assault won’t be enough, though, to prevail against the vast armies commanded by Bright Yilling. The allies will need elf-weapons, hidden and deadly dangerous, designed to kill a god. They will come to suspect a traitor in their midst. And Skara may find herself at odds with that master of deception, Yarvi himself. The narrative, well-sprinkled with gory action and impelled by characters at this stage not just familiar, but gratifying, moves along at a brisk clip. Best of all, the relentless intrigues, plots, and schemes bubble just below the surface.

Abercrombie brings his compact, adroit, and engaging trilogy to a satisfying, if seldom memorable, conclusion.