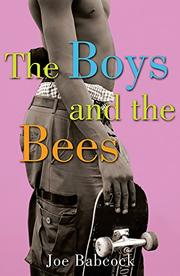 THE BOYS AND THE BEES

An appealing, if slight, novel of coming out of the closet in the ’80s, from Babcock (The Tragedy of Miss Geneva Flowers, 2005).

What distinguishes this work and infuses it with charm is the age of our hero, Andy. Coming-of-age tales typically involve a teen filled with all the usual demons and angst, self-loathing and cynicism. But Andy is just turning 12, and is too much of an innocent for any kind of existential reflection. This is the novel’s saving grace: Andy’s genuine goofiness and naïveté ring so true it’s impossible to dislike him. Andy is sure that sixth grade will be the best year of his life. And why not? He has everybody’s favorite teacher, Sister Mary Kelly, and he’s in love with Mark Saddle, athletic, beautiful and part of the in-crowd. Andy shamelessly tries to move up the popularity ladder to get closer to Mark, but it’s a long climb from the bottom rung, where he lingers with his old best friend, James. Effeminate, lisping James, whom everyone at school calls a “faggot,” can’t understand why Andy is now joining in on the name-calling, especially since the two spend their sleepovers playing sex games. Andy feels sorry for James, but his sense of self-preservation is greater than his adolescent loyalty. James sits alone at lunch, is beat up by Andy’s new “friends” and continues with his passion—drawing epic portraits of the Teenage Mutant Ninja Turtles. Wishes come true as Andy is suspiciously befriended by Mark, who invites the hopelessly inept boy to practice basketball one-on-one at his house. Meanwhile, Andy the budding writer is working on his third novel, featuring Beverly, who, oddly enough, is in love with a boy named Mark. Andy’s novel-in-progress, his prayers to Jesus to keep him from being a gay weirdo and his complex friendship with James, hit just the right note. Andy is neither the wise child nor a noble symbol for discrimination; he’s just a likable kid coming to terms with his homosexuality.

Lightweight fare—just right for the YA market—but an amiable addition to coming-out fiction.