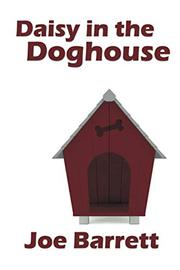 DAISY IN THE DOGHOUSE

A satirical novel tells the story of a father and daughter whose blog upends the economic status quo.

Jack Sullivan, a former CEO who sold his company in order to stay home and write a book about creating a moral form of capitalism, is becoming increasingly aware of odd things around the house. Someone is replacing the toilet paper rolls incorrectly, for instance. Then he discovers the culprit in the form of a blog called “In the Doghouse: Experimentations in Social Disruption at Home,” authored by none other than his own 12-year-old daughter, Daisy Peanut. It has 34,602 followers. “There are like a thousand of those blogs out there already,” explains Daisy, when asked why she started messing with her family and putting the results on the internet. “I had to look at my surroundings and figure out what was uniquely me. And what is uniquely me is that you people are weird and I really enjoy making fun of it.” Jack and his wife, Catelyn, feel understandably violated, but when he realizes how engaged Daisy’s audience is—so much more than anyone he’s tried to talk to about the way the financial system is rigged in favor of the powerful—he sees an opportunity. It’s a great success—sort of. Daisy’s 34,602 followers quickly balloon into millions, and Jack has unintentionally created a demagogue with a reach far greater than any of them could have foreseen. Barrett’s (Managed Care, 2018) prose is clever and clear, and he manages to fit a good deal of political critique in his characters’ high jinks. Despite some really tone-deaf jokes about immigrant maids and the word “gay” (and attempts to defend such jests), the narration—and the dialogue in particular—is generally funny and engaging. While the premise is not at all realistic, the plot moves quickly, and the author finds a number of curveballs to throw at his well-drawn characters. While not the height of satire, perhaps, it is rare to find such a readable book that attempts to deal so directly with a major (and fairly complex) social issue.

An imperfect but ambitious and appealing comic tale about parenthood and the financial system.