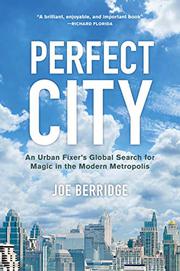 An Urban Fixer's Global Search for Magic in the Modern Metropolis

A Toronto-based urban planner and consultant gives a tour of some of the world’s greatest metropolises.

From Sydney to Belfast, this debut book walks readers through eight cities. Drawing on his career competing in the “high-energy, high-rise global market for ideas on cities and their futures,” Berridge presents his thoughts on urban machinery, economic development, and what makes metropolises work. In England, he became the master planner for the redevelopment of Hulme, “an inner-city district just south of Manchester’s centre that has gone through several incarnations even in my lifetime.” In these pages, he examines Manchester’s history and the impact of Brexit. The author’s firm “specializes in planning downtowns, waterfronts, and similar large-scale urban projects.” In addition, he advises on projects in Belfast, Singapore, and Governors Island in New York City. Throughout the volume, which includes ruminations on Toronto, Shanghai, and New York, the author offers readers insights into differing approaches to city planning. The specters of Jane Jacobs—whom he became acquainted with in his adopted hometown of Toronto—and Robert Moses both loom large. In Singapore, with its planned efficiency, Berridge writes that “a modern version of Robert Moses rules” there. The book works best when the author turns his professional eye toward these cities—“First impressions are so important”—to share reflections that deftly spotlight his knowledge of urban planning. He writes enthusiastically about public libraries and local food. His description of London’s District Line exemplifies his ability to combine urban appreciation with analysis: “Starting in the leafy Thames-side urban villages of Richmond, Wimbledon, and Kew, home to quiet, secure money, moving east it picks up the aspiring inner suburbs of Hammersmith, Putney and Fulham before diving below ground through the expensive squares and crescents of South Kensington.” The volume’s only shortcoming is that Berridge’s discussions of political problems like housing inequality are too cursory. Still, he provides readers with a helpful road map for successful urban development and skillfully details the thinking behind a number of remarkable metropolises.

A compelling and peripatetic account of an urban fixer’s work in cities around the globe.