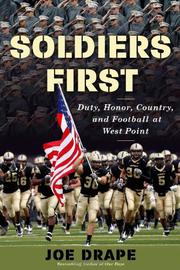 During the 1940s and ’50s, Coach Red Blaik’s undefeated, powerhouse teams thundered up and down Michie Stadium’s field, and Army featured players—Doc Blanchard, Glenn Davis, Pete Dawkins—talented enough to win the Heisman Trophy. At the outset of Drape’s (Our Boys: A Perfect Season on the Plains with the Smith Center Redmen, 2009, etc.) account of last year’s young, not-very-talented team, he concedes that the glory days of Army football are over. He’s in search, however, of something else: Where, in the moral sewer of today’s big-time college athletics, does honor still reside? His book contains a game-by-game replay of the disappointing three-win season, but the author is mainly concerned with explaining what it’s like to play a Division I sport at a place where the idea of a student-athlete is real. He focuses on the coach, Rich Ellerson, the team’s three captains, the quarterback and a few others to tell about a culture where being a player “is a picnic compared to being a West Point Plebe,” where football training camp is far easier than the field training to which all cadets are subjected, and where gridiron disappointments must be set aside quickly, because “[t]here is always something more important coming at you.” At the United States Military Academy, no Hollywood celebrities or NFL stars show up at practice (although a Medal of Honor winner might), no player receives special treatment to ensure his eligibility, nor are any concessions made to cadets who are soldiers first, players second. In reporting this story, Drape had “unfettered access to the Academy.” He’s returned from the banks of the Hudson with a sports book that has far more to do with character, intellect and sacrifice than it has to do with football.

Inspired by his 5-year-old son’s fascination with the pageantry of a televised Army game, Drape went to West Point looking for college football’s “good guys.” He most certainly found them.