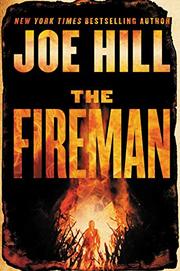 When J.K. Rowling gets it, you know things are bad. And not nicely, either: she’s gunned down by a firing squad, and “her execution had been televised on what remained of the web.” George Clooney has already burst into flames. Why? Well, Clooney was doing his humanitarian thing, and Rowling was just trying to help young people unfortunate enough to come down with a scorching case of Dragonscale, a manifestation of a very unpleasant malady caused, as the epidemiological portion of Hill’s yarn details, by a runaway spore. The worst effects of the illness make themselves known to school nurse Harper Grayson when a street person bursts into flames: “His head tipped further and further back,” Hill writes with graphic glee, “and he opened his mouth to scream and black smoke gushed out instead.” About the only positive thing that comes of this pyromaniacal display is that Glenn Beck torches, too. But then, so do thousands of innocents, causing the usual end-of-the-world scenario, as good Christians form fundamentalist posses to round up and, well, isolate anyone who shows signs of the illness. Against them are arrayed the victims, not all of whom spontaneously combust. Harper’s encounters with this horrible disease, which brings her into the orbit of a mysterious Brit called The Fireman—hero and villain all rolled up into one—are overall less trying than dealing with her nasty husband, a master of passive-aggressive put-downs. Hill shares his father’s ability to write well and sympathetically of and for women, especially the hero of the piece, Harper, who has resources and intelligence far above and beyond what the menfolk suspect. But he also shares dad’s fondness for long, long stories; heft may be a genre convention, but Hill’s narrative too often grinds to a near halt under its own weight.

A satisfying tale overall, just right for the beach. Be sure to wear sunscreen.