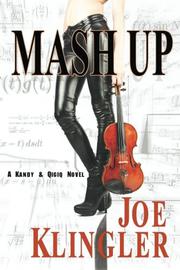 Klingler (Rats, 2014) offers a techno-thriller about digital music piracy and the people it affects most.
Detective Qigiq is visiting San Francisco to help investigate a crime that’s a bit more modern than those in his native rural Alaska. He’s partnered with Detective Kandy Dreeson to investigate a box containing severed fingers that Robina, a music student, received in the mail. The digits are sealed in a plastic bag with a sticker reading, “Don't Steal Music.” Robina says the fingers belong to her roommate, Sally Bellowi, a cellist in the string quartet Fourtunate. In their quest to find the missing Sally, the detectives investigate her many lovers, including a music professor, a rock guitarist, and a man called “Mony,” among others. Elsewhere, in northern California, Eddy Blake, the CEO of a company called Silver Platter, struggles to successfully launch Invisible Hand—software that can scan a computer for illegally downloaded music and then frighten or embarrass the “file-sharer” into never doing so again. Just as he prepares to release it onto the Internet, YouTube footage appears of Sally, his ex-lover—gagged, terrified and likely being raped. Qigiq and Kandy fear that Sally’s kidnapper will finish her off and then choose a new victim. Klingler makes supreme use of his tech knowledge in a grisly mystery that strives to address the ethics of content ownership. His effortlessly clever prose makes the subject thoroughly entertaining, as in a line describing a lawyer as “so uptight he squeaked coming through the door.” The author’s awe of musicians is also apparent: “She played...faster and harder, louder, two notes at a time, the energy filling his ears, her raw beauty filling his eyes.” Unfortunately, for every instance of such respect, there are several that highlight the book’s guys-only tone, in which women are casually objectified: “Eddy…watched as the kid couldn’t resist the opportunity to twist his big neck around and ogle Alicia’s rear as he passed….Eddy didn’t much care if the kid looked, he was just jealous he wasn’t getting that view.” Readers may be surprised to see such a thoughtful, well-constructed tale lower itself to keep certain readers’ attention.
A smart but indulgently sexual thriller.