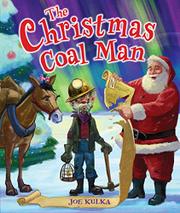 A new helper for Santa is introduced as an elderly, elfin man who provides the lumps of coal for the stockings of naughty boys and girls.

Each year the Coal Man searches through his coal mine with the help of his pet canary and his hardworking mule, gathering enough coal to sell to Santa for Christmas deliveries. The Coal Man wants to retire to a tropical island with his pets, but he can’t afford to quit working. This year, when they deliver their annual load to the North Pole, Santa announces that he will stop giving out lumps of coal, as the negative disciplinary tactic isn’t working. Instead, Santa wants to try a special positive reward for the well-behaved children. The depressed Coal Man is sent away with one bag of coal as a souvenir, but when he slips on the ice, the lumps of coal spill out into the snow, mysteriously transformed into huge diamonds. The Coal Man retires to his island, working for Santa painting shells to tuck in the stockings of “the best good boys and girls.” Humorous illustrations, a large trim size, and double-page–spread format make this a good choice for reading aloud to a group. The full-bleed artwork uses a dark palette of purples and blues, with vibrant flashes from Christmas lights, firelight, and the northern lights illuminating the Coal Man’s exciting discovery of his Christmas gift from Santa.

It’s hard to dig up a new angle on Santa’s cast of helpers, but the Coal Man is a nugget of originality.