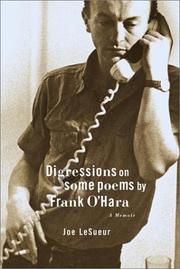 DIGRESSIONS ON SOME POEMS BY FRANK O’HARA

Engaging memoir, completed just before the author’s death in 2001, of his ten years with poet O’Hara.

They met in 1951 and began living together in 1955 in one of those committed-but-not-quite relationships that were common among gay men at the time: “Frank would be made to feel he was more important to me than anyone in my life . . . while I would continue to have my sexual freedom.” LeSueur was a native Californian, survivor of stints as a soldier, an elementary-school teacher, and a “kept boy” who found with O’Hara (1926–66), slightly older and far more sophisticated, with his day job at the Museum of Modern Art and his Abstract Expressionist buddies, the glamorous New York life he had always dreamed of. Together they drank hard, saw a lot of movies, attended classical concerts and the ballet, and hung out with an amazing roster of the city’s brightest talents. John Ashbery, Willem de Kooning, Joan Mitchell, Jackson Pollock, Lee Krasner, Edwin Denby, Robert Motherwell, Ned Rorem, Kenneth Koch, Fairfield Porter, and Tennessee Williams are just a sampling of the famous names lightly dropped in LeSueur’s appealing text, which takes what little organization it has from the O’Hara poems that head each chapter. (Not the least of the pleasures here is the opportunity to rediscover the witty, vigorously colloquial verse of one of the urban experiences’s most enticing bards.) Sometimes LeSueur recalls how or where a poem was written—generally with extreme nonchalance in the midst of the hubbub O’Hara loved—sometimes it prompts more loosely connected reminiscences of a period in their lives or a friendship. The very casual structure occasionally sags dangerously, but it’s always rescued by the charm of LeSueur’s voice, which also brilliantly recaptures a bygone age in homosexual culture when gay men could be out of the closet, even swishy and campy, but only among their bohemian intimates, gay or straight.