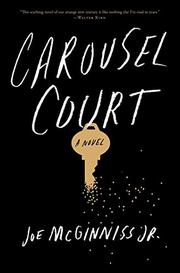 A young couple’s plan to flip a house in Southern California goes awry and old wounds in their marriage reopen in this dark novel of unrelenting tension.

Nick and Phoebe are living in Boston when they notice other “young married professionals buying and selling houses for six-figure profits.” But it’s clear from the word “underwater” on the opening page that their dream is foundering. McGinniss (The Delivery Man, 2008) presents a smooth combination of present-time narrative and extensive flashbacks to reveal two lives wracked by more than just mortgage woes. Their marriage has been haunted by an affair Phoebe had with her mentor, JW, while on the fast track at a financial-services firm in Boston and an accident she had while “high on Klonopin” with their toddler in the car. Moving to California doesn’t improve matters. Nick learns on the eve of heading west that his new job there has evaporated. In their LA suburb, housing prices quickly go south after the couple takes out a heavy mortgage and plows all their money into renovations. Nick finds work as a kind of repo man with other underwater homes. Phoebe is a rep for a drug firm while maintaining a steady high with Klonopin and wine. Then JW resurfaces and Phoebe hopes to use him to get back on the fast track and somehow fix the family. Doomed and doughty, she’s a lexicon of contradictions, a kind of update on Maria Wyeth of Joan Didion’s Play It as It Lays. McGinnis also recalls Nathanael West’s Day of the Locusts in depicting their road, Carousel Court, as a catalog of strangeness and dangers: from coyotes and marauding home invaders to weird neighbors and crying, screaming cicadas.

McGinniss covers familiar territory in the marketplace and marriage but injects it with an urgency, a sense of constant, inescapable threat that all adds up to a taut page-turner.