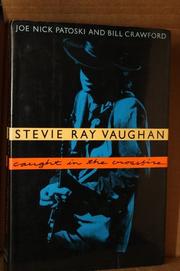 Caught in the Crossfire

The brief life of the legendary Texas blues-guitarist, well told by Patoski (a senior editor at Texas Monthly) and writer/radio producer Crawford, both of whom live in Austin and saw dozens of Vaughan concerts. Raised around Dallas, Vaughan (1954-90) was a guitar prodigy whose greatest influence was his older brother Jimmie, also a guitarist. Whatever musical instrument Jimmie tried to play, Vaughan was sure to imitate him, and as his brother got better instruments, Stevie played Jimmie's electric hand-me-downs. At ten, Vaughan already was feeding on the legends of Howlin' Wolf, Muddy Waters, Johnny Ace, and Bobby ``Blue'' Bland. Determined to make a living off his guitar, he quit school and took his group to Austin, which was then a mirror of the hippie paradise in San Francisco. Even so, Vaughan was neck-deep in low self-esteem and forever hid behind his guitar, but as his powers became more widely known, his intensity as a musician only deepened: During one gig, after playing his finger callus off down to the quick, he borrowed some Superglue, glued the callus back on, and went on with the show. Vaughan played blues with all the giants, from Eric Clapton to Jeff Beck, but eventually drugs and booze numbed the soul out of his playing. At 32, glazed and whacked out, he went to a Georgia rehab, then—with a hand from fellow recoverer Clapton—made a fabulous comeback, remaining sober to his last breath. Just before his death in a helicopter crash, following a concert with Clapton and some fellow legends, he made a record with brother Jimmie, their first together. Released less than three weeks after Vaughan's death, Family Style instantly zapped the charts. Patoski and Crawford do an exceptionally strong job on Vaughan's final three years sober, his early fears, and his huge comeback. (Thirty-five b&w photographs)