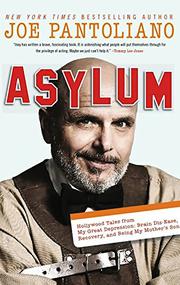 Longtime character actor Pantoliano, known for memorable roles in films such as Risky Business, The Matrix, and Memento, and an Emmy Award–winning turn in The Sopranos, writes about his lifetime struggle with depression and substance abuse.

Known to friends and fans as “Joey Pants,” Pantoliano wrote about his upbringing in 1950s and ’60s-era Hoboken, N.J., in a previous memoir (Who’s Sorry Now: The True Story of a Stand-Up Guy, 2002). Here he focuses on his later life and career, which was profoundly affected by his undiagnosed depression, likely inherited from his psychologically abusive mother. Much of the memoir dwells on Pantoliano’s drunken escapades and fights through the years, his large sexual appetite and, later, addictions to Vicodin and Xanax. In one memorable passage, he gargles with water from a bar toilet after projectile vomiting—just one of several references to vomit and other bodily fluids. Pantoliano largely comes off as having been a selfish, undependable and unpleasantly needy person throughout much of his life, and it can make for rough reading. The book is also hobbled by odd, playlet-like fantasy sequences (including a conversation between Pantoliano and Sigmund Freud), celeb-bio clichés (“I had developed a habit...that when things were going good, I went out of my way to foul them up!”) and an unfortunate affection for exclamation points. On the plus side, Pantoliano is admirably open about his history of depression and his recent work to lessen the disease’s stigma and help others with similar conditions.

A frank celebrity memoir with good intentions but awkward execution.