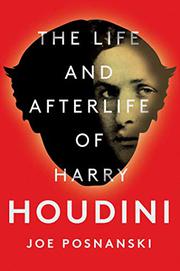 THE LIFE AND AFTERLIFE OF HARRY HOUDINI

Unlocking the doors to the legendary performer’s world of magic.

Noting that there are more than 500 books about Ehrich Weiss, aka Harry Houdini (1874-1926), MLB.com national columnist Posnanski (The Secret of Golf: The Story of Tom Watson and Jack Nicklaus, 2016, etc.) still delivers a jaunty and infectious biography of the famous magician and his impact on magic and popular culture. The author relates his discussions with magicians who have emulated or criticized Houdini’s magic as well as the “truest believer[s]” who have studied and written about him for years. As a young boy, writes Posnanski, “locks spoke to Houdini, and Houdini understood.” Though he said he was born in Appleton, Wisconsin, he was actually born in Budapest. This lie, discovered Posnanski, is a key to understanding how Houdini achieved his mythic status. “[Houdini] believed that magic was about the performer more than the performance,” writes the author, “and the bigger, gaudier, more dangerous, more thrilling, the better.” Posnanski’s Houdini is a consummate liar and a genius at self-promotion. He hired ghost writer H.P Lovecraft to “tell exaggerated tales about him or write short stories under the Houdini name” and planted self-aggrandizing stories about himself in the local newspapers of the towns where he performed. Posnanski is excellent at describing Houdini’s greatest escapes, from the famous Mirror Cuffs to straitjackets. The author chronicles his visit to David Copperfield’s private museum; the Houdini Museum in Scranton, Pennsylvania, where he viewed the rare Houdini film, The Grim Game; and the Academy of Magical Arts’ exclusive Magic Castle, where he finally got to meet Patrick Culliton, author of the rare and coveted Houdini: The Key. Houdini was good as a magician, Posnanski learns—he created the popular needles-in- the-mouth trick and made an elephant disappear—but he was, above all, a remarkable performer. Spoiler alert: The author does not reveal any Houdini secrets.

Entertaining and brimming with wonder.