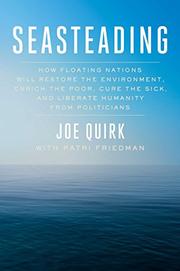 How Ocean Cities Will Change the World

by Joe Quirk with Patri Friedman

The founder and communications director of the Seasteading Institute make a case that the survival of the planet depends on moving out from the land onto the sea.

Venture capitalist Friedman, the grandson of economist Milton Friedman, and novelist and science writer Quirk (Call to the Rescue: The Story of the Marine Mammal Center, 2009, etc.) present an optimistic if biased argument for the many advantages to be gained by setting up floating cities outside of the control of any current national governments. The most intriguing of these arguments involve environmental concerns. For example, the authors suggest that massive farming of seaweed for food and energy will help to slow or reverse the effects of climate change, and they describe a new approach to fish farming, pioneered by the Velella Project, in which large, open cages for fish are circulated through ocean eddies, allowing waste to be deposited on the deep ocean floor. While their suggestions are encouraging, they also depend on global consumers making the choice to switch to eating seaweed and fish such as kampachi, “the placid sheep of the ocean.” Their libertarian arguments are more problematic: suggesting that the world’s population will distribute itself more equitably outside of conventional governments is overly idealistic, and proposing that medical institutions operate offshore to avoid government regulation raises as many problems as it solves. Their vision of floating cities, complete with “upside-down floating skyscrapers—seascrapers,” is tantalizing, though aspects of it are far-fetched. The use of insider jargon—“seavilization,” “aquapreneurs,” “bluetopia”—can be off-putting, as can the constant plugs for their institute. In the useful and concise concluding chapter, the authors address possible reader fears such as tsunamis, rogue waves, trash disposal, pollution, and piracy.

While the authors’ enthusiasm should be taken with more than a grain of salt, they raise ideas worth considering and offer hope for a future when life on land has grown grim.