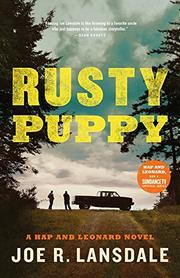 A woman's plea to find her son's murderer sets the stage for the latest Hap and Leonard mystery.

When an older black woman engages Hap and Leonard to find out who murdered her son, her plea for them to take her case ends with a bombshell: she believes that the local police are the killers. Not surprisingly, Hap and Leonard soon run afoul of the corrupt police ruling over a scruffy Texas town. But considering the two have a talent for stirring up trouble, they also incur the enmity of a group of bad-news project kids, some local drug dealers, the operators of an illegal fight club, a corrupt lawyer, and generally everyone they run into. The best of the supporting characters is named Reba, a young black girl whom Leonard refers to as a vampire midget and whose dialogue is a consistently delightful work of foulmouthed art. (Imagine Wanda Sykes in Our Gang as directed and written by Quentin Tarantino.) The pleasure of any Hap and Leonard mystery is the yin-yang of the two heroes: white/black, straight/gay, liberal/conservative, easygoing/hair-trigger temper. Without making any brotherhood speeches, the books are rough-hewn fables of tolerance in action. Part of the reason it all goes down without any kind of "Kumbaya" ickiness is that Lansdale (Honky Tonk Samurai, 2016, etc.) writes such good smart-ass repartee. He also, though, in book after book, reaches a point where he takes the violence too far and breaks faith with the reader (it was a problem in the first season of the Hap and Leonard TV series as well), including here a rape dealt out to a character we've become fond of and a final brutal fistfight that goes on for too long.

Minor blemishes aside, this puppy tells a waggly tale the reader is happy to follow down the roughest paths.