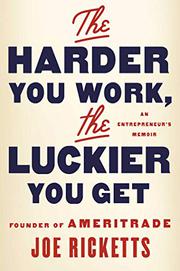 THE HARDER YOU WORK, THE LUCKIER YOU GET

The founder of Ameritrade delivers a blend of memoir and entrepreneurial manifesto.

While he never quite slips into Ayn Rand territory, Ricketts, who founded Ameritrade as a vehicle for simplifying stock trading for a mass audience, strikes the pose of businessperson as hero and artist: “Business was an act of creativity and courage. Other people didn’t seem to see it this way, but to me, business was where life came alive.” For all that, it was a slog for him at first. The author recounts starting out as a credit reporter in the 1960s, taking his father’s advice that exposure to a variety of businesses would be useful to him in his career, whether a hamburger franchise or a wholesale furniture warehouse. Connecting the lessons he had learned in economics classes with the real world, he became a broker in an era when the Dow was about to break 1,000 and, “for the first time since the stock market crash of 1929, large numbers of individual investors had jumped into the market,” fueling the rise of the newfangled mutual fund. His breakthrough came a decade later, when he figured out how to trim costs by inducing customers to come to him, eliminating the need for commissioned reps, and otherwise “disintermediating” to offer trades at $25 a pop. Bingo: The phone started ringing from customers “who didn’t want advice, just a better deal.” However, as Ricketts recounts, technical challenges were constant companions, from computers that would backfire with static electricity to the need for equipment that could keep up with the speed of real-time trading in the days before the quants and algorithms took over. Securities and Exchange Commission challenges, fraud, troubles with risk-averse partners, and other bugs posed problems as well. Ricketts fights them off page after page, all while extolling the need for nonconformity in the quest for getting “some happiness and satisfaction out of doing something new."