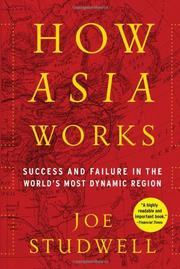 Success and Failure in the World's Most Dynamic Region

One of those success stories is Taiwan, which benefits from a tropical climate and the abundant rain and heat that come with it, making the island nation a vast garden as compared to much of neighboring mainland China. It benefits more, Studwell writes, from having undergone a program of land reform that preserves the “labor-intensive gardening approach” while rewarding individual ownership through an incentivized market structure. By contrast, tropical Philippines is hampered by a land tenure system that concentrates ownership in a few hands, notably an “estranged first cousin” of Corazon Aquino, who had been a former crony of dictator Ferdinand Marcos. For all the success of places such as Taiwan, Kerala and West Bengal, Studwell writes that “a country cannot sustain growth on agriculture alone” and then moves on to discuss the development of profitable (and sometimes not-so-profitable) industries and innovative financial sectors. The author also examines all of the lessons learned from throughout Asia in the light of how China has fared, with extremely mixed results: The country, he observes, has failed to truly serve its private sector and maintains a financial system “that has almost certainly been unnecessarily inefficient.” Removing such hindrances and encouraging freely moving institutional systems can only further China’s growth, he adds.

A solid blend of the descriptive and the prescriptive, with plenty of lessons that will be of interest to Asia hands, investors and policymakers.