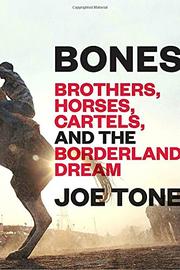 A deep dive into the world of the Mexican drug cartels and their unexpected relationship with quarter horse breeding and racing in the southwestern United States.

In his first book, former Dallas Observer editor Tone concentrates on the span of time between 2008 and 2013, and he ably keeps a large cast of characters in play. Chief among these are brothers Miguel and José Treviño, FBI agent Scott Lawson, and horse breeder Tyler Graham. He emphasizes the contrast between Miguel and José. Miguel, who later called himself “Quarenta” or “Forty,” became the infamously violent leader of Los Zetas cartel. Meanwhile, José crossed the border to the U.S. to work as a mason and become an American citizen. However, after he had been in America decades, he suddenly started purchasing racehorses for large amounts of cash, including a young stallion nicknamed “Huesos,” or “Bones,” for his gawky build. The FBI, in a team led by newbie Lawson, who had recently moved to Texas, began investigating the strong possibility that Forty was using his brother to launder drug money. In the process, Lawson recruited Graham, who ran the ranch that housed Huesos, as an informant. Throughout the book, Tone maintains a vivid and balanced narrative; he tells the story clearly, relatively objectively, and without oversimplification. The author is somewhat hampered by the fact that only Lawson would consent to talk with him, which makes the agent come across as the most well-rounded and sympathetic character. However, Tone does his best to understand the other people involved, using thorough research to get a palpable sense of their lives and motivations.

A suspenseful story as well as a fascinating depiction of the mechanics of money laundering, the largely unfamiliar world of quarter horse racing, and the dynamics of an extended family, the book draws readers into the complexities of life at the border.