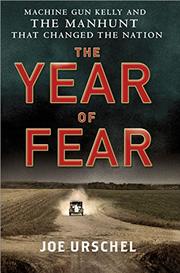 THE YEAR OF FEAR

Machine Gun Kelly and the Manhunt that Changed the Nation

The colorful story of George “Machine Gun” Kelly (1895-1954), a Depression-era kidnapping, and the rise of J. Edgar Hoover and his G-men.

In 1933, the year after the famous Lindbergh baby kidnapping, oilman Charles Urschel (no relation to the author) was abducted from his Oklahoma home and held for nine days. After Urschel’s release in exchange for a $200,000 ransom, the kidnapping turned into “a national melodrama that…played out over the nation’s radio networks and on the pages of its newspapers.” The notorious Kelly and his gangster-moll wife, Kathryn, were pursued in a frantic manhunt coordinated by the ambitious Hoover, who, at 36, had just become head of the U.S. Department of Justice’s new Bureau of Investigation. In this action-packed debut, author Urschel, the former managing editor of USA Today who now directs the National Law Enforcement Museum in Washington, D.C., offers a vivid re-creation of the massive, multistate manhunt that led to the capture and imprisonment of America’s “new Public Enemy Number One.” Sometimes overly detailed and containing liberal quotations from contemporary newspaper accounts, with prose matching its tough-guy, B-movie aura (“She snapped the waistband closed with a definite click, like the sound of a .38 slug sliding into its chamber”), the book captures the rampant criminality of the 1930s and the public’s yearning for a return to law and order. The author packs the pages with shootouts, bank robbers, and corrupt cops. With the passage of the Lindbergh law, making it a federal felony to take a kidnapping victim across state lines, the self-promoting Hoover was poised to stop Kelly and show that his agents had the makings of a federal police force. His bureau became the FBI in 1935.

An entertaining slice of the fabled (and familiar) gangster epoch.