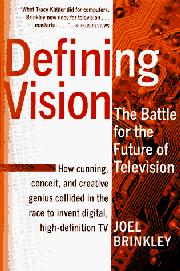 The Battle for the Future of Television

What Tracy Kidder did for computers, Brinkley now does for television, in this masterful chronicle of the flips, foibles, and frenzy that characterized the nearly decade-long race to develop high definition television (HDTV). Pulitzer Prizewinning New York Times reporter and novelist Brinkley (The Circus Master's Mission, 1989) effortlessly deploys his research and unparalleled access to the major players to weave a wry and riveting tale that is as broad as it is deep. With research costs totaling nearly a half billion dollars, HDTV began life as an expensive Japanese attempt to improve upon the poor picture quality and boxy aspect ratio of conventional TV. It attracted little interest in America until the mid-1980s, when broadcast-industry lobbyists realized that they could use it to hold onto all their government-allotted channels, thus staving off all the other parties (such as police radios) that wanted to set up shop on the broadcasters' unused stations. The Japanese HDTV system was quickly brought in, but this set off nativist alarms. So commissions and subcommissions were appointed, and a competition to build a new national HDTV was announced. This set off a frantic race, as everyone from the Japanese to AT&T to MIT and the once great American TV manufacturer Zenith jumped in. Engineers worked frenetically, producing incredible leaps in technology, and soon a number of prototypes were tested. Unlike the Japanese product, most of these systems were digital (which made them computer- compatible), but none of them were outright winners. Pressured by Richard Wiley, the wily chairman of the HDTV Advisory Committee, the remaining contenders banded together in a far from happy alliance. But ever-prompted by Wiley, surmounting obstacle after obstacle, they eventually produced a winning high-definition television. This is one of those rare books that elevates the usual bureaucratic drudgery of corporate America to an almost Shakespearean level of characterization, passion, and drama. (Author tour)