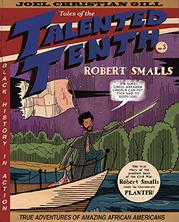 From the Tales of the Talented Tenth series, volume 3

An enslaved sailor successfully commandeers a Confederate ship and sails it to freedom.

Robert Smalls was a 23-year-old enslaved deckhand on the Confederate ship the CSS Planter when he devised a plan to emancipate himself and 15 others, including his wife and children. Smalls’ work on the ship allowed him to learn the navigation and codes needed to move through the blockaded waters surrounding Charleston, South Carolina. It was also how he discovered that the Union would accept those fleeing from slavery as contraband. Against military orders, the captain of the ship allowed White crew members to spend the night away from the ship, entrusting it to the Black sailors. Seizing the opportunity, Smalls led a dangerous escape through Confederate checkpoints by acting as the White captain. His daring resulted in the freedom of those aboard and the capture of a ship and arms for the Union. The epilogue gives more examples of Smalls’ efforts to improve the lives of his people after the Civil War, including as a member of the U.S. House of Representatives. This graphic depiction of Smalls’ story successfully captures the determination of enslaved people to secure their own freedom. The colorful panels fully express the taut drama of the venture. This is the latest in the Tales of the Talented Tenth series by graphic storyteller Gill, presenting little-known tales from African American history.

An inspiring saga of a real-life hero.