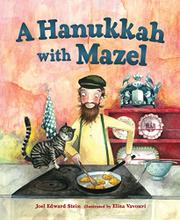 A HANUKKAH WITH MAZEL

A poor artist, a lost and hungry cat, and a peddler are each blessed with good fortune during the week of Hanukkah.

Misha, “a very good artist,” lives in an impoverished town where few have money to buy his paintings. The first night of Hanukkah Misha finds a tabby cat in his barn, adopts and names him Mazel (“luck” in Hebrew), and shares his meager portion of potato latkes. Though he cannot afford candles for his artisan grandfather’s silver menorah, Misha finds a way to commemorate the nightly ritual by rendering a painting of his heirloom. Using the last of his paints he depicts the glowing flames, one each night of the holiday, until a fully lit menorah is the focus of his canvas. Having just enough paint for the eighth candle makes for a subtle metaphorical parallel to the scarcity of oil in the traditional Hanukkah story, though Stein’s themes of hope and luck are the prevailing ones. The uncomplaining artist makes the best of things until a little luck brings to his door a traveling peddler who finds market potential in Misha’s paintings. Muted tones depict an Eastern European setting, a rosy-cheeked, bearded young religious man, and a wrinkly, sun-weathered old peddler. Washed-out scenes of an Old-World simple life contrast with the deeper tones of Misha’s numerous paintings.

An appropriately modest reminder of Hanukkah’s promise and the importance of perseverance.