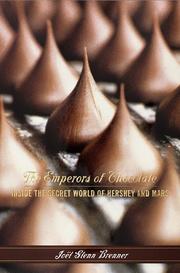 THE EMPERORS OF CHOCOLATE

Inside the Secret World of Hershey and Mars

Former Washington Post reporter Brenner expands a simple assignment into an inviting visit to candy land, a place dominated by the legacies of two very different corporate dictators. The late Milton Hershey was, reportedly, benevolent and sweet as a Hershey’s Kiss; Forrest Mars Sr., obsessed with control and perfection, was not so sugary. Says Brenner: “where Milton Hershey saw utopia, Forrest Mars saw conquest.” Now their firms are locked in fierce competition for confectionery hegemony. It’s not for peanuts. The retail sales value of candy hit $28 billion last year, and Mars and Hershey together control three quarters of the candy rack. M&Ms by Mars produces more dollars than Camel cigarettes, and Hershey’s Reese’s Peanut Butter Cups outsell Ivory Soap. It’s a global industry, secretive and underreported (especially in the case of privately held Mars). Mars, where they taste dog food to ensure quality, is paranoid, and Hershey, to protect manufacturing techniques, no longer conducts factory tours. Well, how would you get an almond inside a Kiss? Brenner tells how. She tells how Reese’s Pieces became “E.T.’s favorite candy.” She tells how cocoa is transformed from pods in the tropics to Milky Ways in the supermarket and why chocolate tastes so good. And she describes the people whose life’s calling was and is to create cravings for candy. The 25 pounds of sweets Americans ingest each year provide wholesome energy, they say, never acne or tooth decay. The big rock candy mountains have grown and diversified. They sell pasta and dog food. Mars may earn as much from commodity futures trading as from candy sales. With this text, the industry will be a bit better understood by those who don’t read Confectioner magazine. Stock up on Godiva and Goo-Goo Bars and be entertained by this substantial report, without sugar coating, on a surefire topic. (photos, not seen)