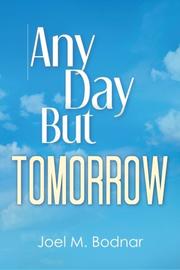 ANY DAY BUT TOMORROW

From college party life, through two tours in Vietnam, and into his professional and family life, Sam’s abuse of alcohol deepens. Sam drinks when he’s depressed, when there’s something to celebrate and to calm his nerves after work. His alcohol consumption continues to seep into his daily routine when he drinks during lunch at his local bar and before going out with friends. Mary, his college sweetheart and wife, tolerates it when he sneaks downstairs at night to drink after everyone goes to sleep and returns to bed blackout drunk. But not for long. Soon, Mary asks him to sleep in the spare room. She says, “I don’t want to sleep with someone who always stinks of alcohol.” Shunned by his wife, Sam takes refuge in his friendship with his co-worker Jane. He feels completely safe talking with her about his growing depression, and Jane and Sam begin an affair. In hindsight, Sam recognizes that Jane had been enabling his addiction by buying him alcohol, driving him to and from work, and hiding him in the back office when he was too drunk to be seen by clients. But when Sam hits rock bottom, the special women in his life initiate an intervention and help him into rehab. As much about sex as it is about alcohol abuse, this book shows how the combination of the two can be especially destructive. Sex scenes, which vacillate among awkward, titillating and disturbing, are often driven by characters’ insecurities. In this way, sex and alcohol are positioned as complementary drugs. Once Sam gets sober, developing a new way of thinking about sex becomes paramount to his journey from dependence and recovery. While the book attempts to show the complexities of the relationships between characters by regularly shifting points of view, these transitions are often abrupt.

An unornamented look at the affects of addiction on one man’s life.