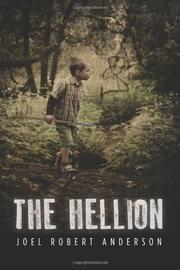 A young man with an abusive childhood discovers he’s the son of Satan and becomes a prince of hell.

In tiny Riverton, Minn., George Carlson grows up in a large, chaotic family where he bears the brunt of his mother’s and half brother’s cruelty. Forced to defend himself at an early age, he becomes skilled at fighting, escaping and surviving in the surrounding wilderness. At 18 and on the brink of joining the Army, George is framed for murder by Rick, his half brother, and finds himself in hell. There, he discovers he’s the son of Satan and that it’s time for him to fulfill his destiny: Become a devil and rule the underworld. No quick summary can capture this book’s strangeness: an odd assortment of childhood abuse, small-town memories and (in the second half) fantasy horror/humor. Whether it’s camping trips and toboggan rides, a battle in hell or fratricide, Anderson recounts it all in a remote, deadpan that varies only when verging into black humor. Riverton is a demented Lake Wobegon where local characters include Smiling Jack, “mute, glassy-eyed and with a Joker-like grimace from a WWI gas attack,” who likes “to get drunk on banana extract” and the Watsons, “Riverton’s hillbillies”; when a new fridge gets wedged in the doorway, “they kicked a hole through the wall and walked around it.” Anderson is not a polished writer. His anecdotes, for example, aren’t always tied together, but he has a gift for description, particularly authentic details of life and work in the Minnesota north woods. Nevertheless, the many descriptions of base ignorance and cruelty make much of this book unpleasant to read—and that’s before we get to hell. That section (often rather funny and comprising half the book) is interesting less for the events it describes than for how it turns a dark mirror on George’s childhood. Perhaps hell is identifying with your abusers. The ending provides the tiniest glimpse of a life that might be different for George, as does the book’s closely guarded sense of compassion.

Like an unholy union between Garrison Keillor and Stephen King, this book mixes small-town Americana with horror in ways that can be odd, off-putting and sometimes compelling.