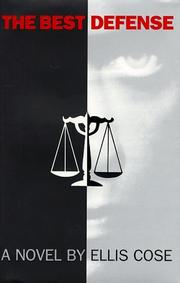 Veteran Newsweek editor Cose turns from his distinguished nonfictional studies (Color-Blind: Seeing Beyond Race in a Race-Obsessed World, 1997, etc.) to an issues-oriented legal suspenser, with provokingly inconclusive results. Nobody denies that accountant John Wisocki, fired from his job at Computertronics when the company was swallowed up by Infotect, took a gun one Sunday evening to the office of Francisco Garc°a, the junior colleague who’d been kept on instead of him, and shot Garc°a moments after he arrived. But was the shooting deliberate and premeditated, fueled by hatred and backlash against affirmative action, as Wisocki seemed to indicate in a note he composed on Garc°a’s own word processor: “I know that some people have suffered unjustly. But America never persecuted Colombians”? Or was the death an accidental interruption of the suicide Wisocki had planned without having any idea that Garc°a would come in that night? Even before the trial begins, Wisocki’s attorney, rising black star Felicia Fontaine, scurries to make the defense’s case in the press, running at every turn into the counterthrusts of her ex-lover, senior trial counsel Mario Santiago. Because Felicia is Cose’s heroine, he spends lots of time showing the unlikely bedfellows she courts, or who court her(Wisocki’s estranged wife, a loudly approving right-wing radio show host, a lecherous minister, a bevy of TV talking heads), in an attempt to put Wisocki in the best possible light. The real novelty of his presentation, though, isn’t the expected ringing debate about affirmative action (which duly appears, but only with a secondary emphasis), but the evenhanded back-and-forth between Felicia and Mario, both by turns worried about their witnesses, depressed about holes in the evidence, and utterly confident—usually at the end of the same day’s testimony—of victory. The result is that rarity, an unpredictable courtroom drama in which disputed facts take a backseat to the issues they raise, and whose leading questions are still hanging when you turn the final page.

THE END OF ANGER
by Ellis Cose
Nonfiction

THE ENVY OF THE WORLD
by Ellis Cose
Nonfiction

A NATION OF STRANGERS
by Ellis Cose
Newsletter sign-up