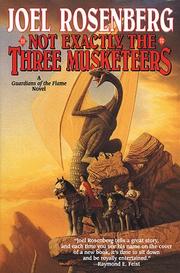 NOT EXACTLY THE THREE MUSKETEERS

the three vaguely resemble Dumas’s immortal trio in that they value honor above all: dim-witted redhead Kethol gambles and likes to rescue damsels in distress; huge swordsman Durine prefers to seek out whores; ugly Pirojil likes his beer. Along the way they acquire their D‘Artagnon, the mediocre wizard Erenor, who poses as their servant as they wend their way in and out of trouble. Elanee quickly agrees to allow Leria to accompany the three back to Beralyn, but she’s definitely up to no good; Durine’s nearly killed spying on her as she feeds a mysterious creature she keeps in a cave. The trio survives an assassination attempt—but who sent the assassins, and why? A peasant gang seeking the gold dowry they’re supposedly carrying attacks them—but who told the peasants this?—and only Erenor’s magical illusion saves them. It emerges that Elanee’s creature is a dragon she’s trained to kill the public-spirited dragon Ellegon, who protects Emperor Thomen. A graphically, sometimes nauseatingly detailed gut-ripper with a carefully crafted backdrop, a picaresque but otherwise rudimentary plot, and few attempts at originality: should please Flame fans.