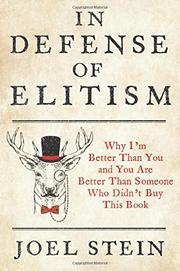 IN DEFENSE OF ELITISM

The rise of populism inspired a journalist’s search for answers.

Former Time staff writer and columnist Stein (Man Made: A Stupid Quest for Masculinity, 2012) brings wit, irreverence, and considerable thoughtfulness to a timely issue: the rise of anti-elitism in politics, science, education, and many other areas that privilege knowledge and expertise. “Elites are people who think; populists are people who believe,” he writes. “Elites defer to experts; populists listen to their own guts. Elites value cooperation; populists are tribal.” To help elites turn back the populist trend, the author decided to investigate what populists want, why they think as they do, and how elites can maintain and defend their authority in a changing world. His search took him to Miami, Texas, a town of about 600 residents, more than 95 percent of them Trump voters. As he expected, they own guns, are faithful congregants of the First Baptist Church, and take every opportunity “to delegitimize expertise.” The Miamians think that hyphenated Americans only inflame racial and ethnic conflict. “Elites may have not caused racism,” they contend, “but they’ve magnified racial tensions, in the same way that abolitionists exacerbated our nation’s problem with slavery.” They trust one another but not their country. “They’re living in a remote tribal island,” Stein concludes, “untouched by the last thirty years.” Yet, they welcomed the author—a journalist and a Jew—warmly. Stein’s research also took him to elite conferences, where, he discovered, “the elite dream, is not to own a yacht but to give a TED talk.” Among Stein’s interviewees are FOX political commentator Tucker Carlson, who rants against diversity, and “Dilbert” creator Scott Adams, who has bought into the “primordial masculinity” of populism, along with its conspiracy theories. Stein repeatedly—and persuasively—makes a case for expertise. “The world seems fragile and I want trustworthy, trained people running it,” he writes. As for the “Intellectual Elites” who do, precariously, run the world, he offers a word of advice: respect. Listen without judging or mocking; negotiate with empathy.