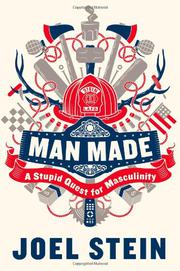 A Stupid Quest for Masculinity

Impending fatherhood convinces a former devotee of Easy-Bake Ovens that it’s time to start learning the ways of rough-and-tumble guys.

Time columnist Stein knew that he had to “man up” at least a little bit after learning that his wife Cassandra was pregnant with their first son. The author wanted to be the type of dad who plays catch with his boy, teaches him how to build campfires and tie square knots. Unfortunately for him, Stein didn’t actually know how to do any of these things; hair product and home-baked goods were more in his wheelhouse. Unabashedly urbane, the author forged ahead with what proves to be a consistently hilarious and surprisingly profound crash course in manliness. Among other adventures, he raced to fires, camped in the wilderness, tracked wild turkeys and shot a powerful Army cannon. In every circumstance he was the ultimate fish-out-of-water propelled ever forward by a deep devotion to his newborn son—a reality that infuses every wild escapade with as much warmth as humor. Almost every delightfully descriptive paragraph seems to be punctuated with a wry turnaround or self-deprecating knock aimed squarely at the author’s supposedly unmanly nature. Venturing so far out of his comfort zone definitely demonstrates a father's love for his son, but it also does much to reconfirm the value of masculine identity. Although Stein acknowledges the absurdity of subjecting himself to choke holds designed to render opponents unconscious, he can’t help but embrace undeniable manly virtues like physical strength, camaraderie and courage—and seek to pass them on to his son.