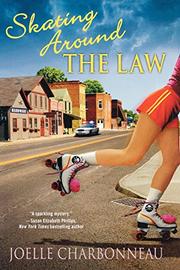 SKATING AROUND THE LAW

A country-born urbanite’s return to the big city is delayed by murder.

Rebecca Robbins has come back from Chicago to Indian Falls, Ill., to sell the roller rink that was her mother’s pride and joy. When she finds handyman Mack Murphy’s corpse, his head in a toilet at the rink, her plans for a quick escape are shattered. The sheriff hopes for a verdict of suicide, but when the autopsy reveals a drug in Murphy’s system that could have caused disorientation, Doc Truman votes for murder. Since the sheriff is more interested in gardening than sleuthing, Rebecca starts snooping around with help from her zany grandfather, who’s suddenly become the town Romeo. A meeting with hunky veterinarian Lionel Franklin and his hat-wearing camel Elwood strikes sparks so strong that Rebecca has to remind herself that she wants to return to Chicago. Soon enough, the case heats up. Murphy had been acting very strangely recently, and his angry clients make excellent suspects. Rebecca starts getting threatening letters and flat tires, and the natives she’s known all her life seem curiously eager for her to leave town. Even after her questions have turned up some of Mack’s secrets, she realizes that picking the guilty party from a crowded field will be no easy task.