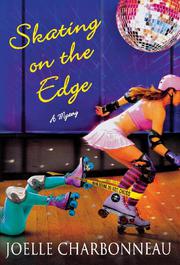 SKATING ON THE EDGE

A skating rink owner is involved in yet another murder.

After her mother died, Rebecca Robbins returned to her hometown hoping for a quick sale of her mother’s beloved roller rink. But fate has conspired to keep her in Indian Falls solving mysteries (Skating Over the Line, 2011, etc.), rescuing her Elvis-impersonator grandfather from scrapes and romancing the local veterinarian. Now, Rebecca volunteers to take a turn in the dunk tank at the town’s Native American Summer Days but has to pull out at the last minute to help grandpa with his band, a job usually done by her con-artist father, who’s back in town after deserting his family years before. Sherlene-n-Mean, one of the roller derby girls who uses her rink, takes her place. When she’s electrocuted on her first dunk, Rebecca naturally wonders whom the booby trap was meant for. Her misgivings mount after the rink’s disco ball falls and narrowly misses her. Rebecca may not be the most popular woman in town, but she can’t believe anyone actually wants her dead—not even her father, who stands to inherit the rink. Maybe Sherlene, who is actually ex-nun Shirley Cline, was the real target. At least Rebecca is gratified to find that, although the roller derby team has only recently moved in from another town, its members like Rebecca enough to volunteer as her bodyguards while she uses her skills to find a killer who may or may not be after her.

Rebecca’s amusing third continues to flesh out its continuing characters while providing an eccentric bunch of murder suspects.