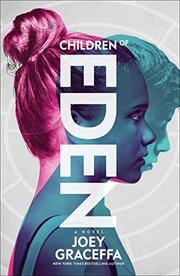 From the Children of Eden series, volume 1

A teenage girl finds her way through a dystopian society.

In this far-flung future, the world’s environment has collapsed, and the remains of humanity live in Eden, a walled-off society built by the brilliant Aaron Al-Baz, an environmental prophet. Bronze-skinned Rowan is the second-born to her twin brother, Ash, which makes her a major liability. Families are only allowed to have one child, so Rowan’s existence has been carefully hidden all her life. After Rowan’s mother tells her they’ve made arrangements for her to go live with another family, Rowan sneaks out at night and meets Lark, Ash’s best friend. The two girls strike a friendship that kindles toward romance, but before the fire can spread, Rowan’s existence is discovered and the terrified teen flees. Rowan discovers a band of rebels and uncovers a startling truth about Al-Baz. The tropes of the teen dystopia abound, but Graceffa keeps things moving quickly enough that readers won’t mind. Rowan could easily become a navel-gazer, but the story keeps her from descending into insularity. After an intrusively expository start, Rowan’s journey from loner to rebel is smartly paced and cleverly constructed. Her love interests are less developed, and the aftertaste of Eden has a bit of a “been there, done that” feel, but the author injects just enough original thought and spins the yarn fast enough that readers will still have a good time.

A promising start that gets more right than wrong.