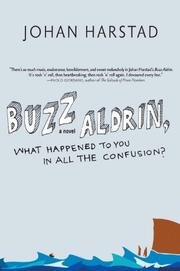 BUZZ ALDRIN, WHAT HAPPENED TO YOU IN ALL THE CONFUSION?

Or, the long-awaited Great Faroese Novel: a splendid confusion about life, love and intrigues in the land of the midnight sun.

Thirty-something Norwegian writer/musician/all-around pop icon Harstad has been making quite a splash—or, perhaps, splashdown—with his debut novel of 2005, which was published in 11 countries before making its way to these shores and is now a feature film in the making. The story is perhaps uneasily fitted to the silver screen, for it’s big and sprawling, and most of what happens does so in the interiors of its characters. The protagonist is a lovelorn gardener named Mattias, a young man of simple pleasures and absolutely no ambition: “Here in the garden, and I wanted to be nowhere else in the world” apart—perhaps, from hanging out with his friend Jørn. Mattias finds backing for his contentment in his station in the fate of Buzz Aldrin, the astronaut, who, though in command of the Apollo mission, had all his thunder stolen by Neil Armstrong, whom history remembers as the first man on the Moon, even though Aldrin was “a more experienced pilot in just about every way.” Given the choice, Jørn, naturally enough, would want to be Armstrong, and so the twain diverges—and presto, Mattias, coming into adulthood at just about the time Olof Palme is shot dead in Sweden and the age of Scandinavian innocence dissolves, finds himself in the remote Faeroe Islands. For a man who wants nothing more than for nothing to change, the new venue would seem to be ideal. But, of course, the world intrudes even on the Far North, and Mattias finds himself caught up in weird cabals and improbable plots about which he keeps suitably mum (“Didn’t mention any catastrophes, bloodied hands or envelopes that appeared from nowhere filled with large amounts of money"). The austere landscape and people of the Faeroes become players in Harstad’s poetic narrative, half-dramatic and half-comic, which takes on memorable turns with every page as Mattias realizes just how not in control of his destiny he really is.

A modern saga of rocketships, ice floes and dreams of the Caribbean, and great fun to read.