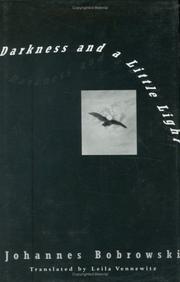 DARKNESS AND A LITTLE LIGHT

Short, allegorical, and deceptively simple stories that make use of the author's experiences as a displaced person. Bobrowski (Shadow Lands: Selected Poems, not reviewed) has a mixed Lithuanian, Prussian, Polish, and German heritage; part Jewish yet devoted to the Lutheran church, he was a Russian POW during WW II. It's impossible to read these tales (often only two or three pages long) without keeping the writer's heritage in mind. Because so little was familiar when Bobrowski returned to his devastated homeland in 1949, he seems to have set about imagining what took place in his absence. ``I have begun another life,'' states the nameless narrator of ``That Was Really The End,'' with a hint of regret but in no uncertain terms. In the title story, men sitting in a bar speak of friends attempting to regain lost objects or positions: ``Supposed to mean something but it's just plain ridiculous.'' This is the point of view from which each tale begins, but in Bobrowski's hands the ridiculous is twisted, turned, and shoved into grave meaning. He focuses not on catastrophes, but on private moments. Ordinary people, often through no fault of their own, find their lives excessively burdened. In ``Mouse Feast,'' a Jewish shopkeeper throwing a crust of bread to the mice is suddenly confronted by a German soldier. In ``Interior'' three people in a room have but a few meaningless words for each other, while an elaborately described grandfather clock becomes a ticking bomb. Two longer stories (``Darkness and a Little Light'' and ``Boehlendorff'') use the cryptic style that works so well for the shorter pieces to lesser effect: Darting back and forth in time—here a name change, there a shift in occupation—they are guaranteed to send readers flipping back through the pages, trying to remember who was who. Good things come in small packages.