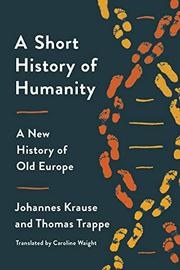 A SHORT HISTORY OF HUMANITY

A New History of Old Europe

A lucid overview of European prehistory.

“Bones and stones” once dominated archaeology, but advances in genetics have produced new information and settled old arguments about human evolution, relationships, and migrations. Krause, the director of the Max Planck Institute for Evolutionary Biology, and journalist Trappe write that the young field of archaeogenetics enables scientists to “read skeleton fragments and identify connections that would have been unknown even to the people to whom the bones belonged.” By the end of the 20th century, anthropologists knew that ancient hominids had left Africa and spread across the old world. Modern Homo sapiens did the same more than once, arriving permanently in Europe 40,000 years ago. There, they encountered the closely related Neanderthals, who soon died off or were absorbed, leaving us a sprinkling of their genes. A series of ice ages made life difficult until the current warm spell began 12,000 years ago. Modern European DNA contains genes from the hunter-gatherers who thrived until they were marginalized 8,000 years ago by a mass migration of farmers from Anatolia (modern Turkey), which had undergone the agricultural revolution. Completing the modern European genome required another mass migration of pastoralists from the Russian steppes 4,800 years ago. Near the halfway point of the book, the authors pivot from the genetics of our ancestors to their diseases. Hunter-gatherers were too scattered to support epidemics, which began when humans began to live close to one another and their animals, the source of most modern-day epidemics. Readers may be surprised to learn that scientists were only able to offer guesses about the cause of the 14th-century Black Death and earlier plagues—until 2011, when they decoded the genome of the bubonic plague bacillus. Leprosy also terrorized our ancestors but retreated, replaced by tuberculosis, a closely related bacillus, which became the leading killer until the 20th century. The authors conclude their tight yet wide-ranging survey with a discussion of how science does not support any claims of racial supremacy.

An impressive update on human evolution.