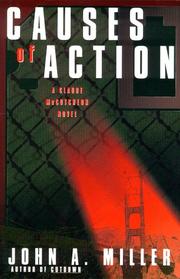 by John A. Miller

Miller’s laid-back, pistol-packing legal champion of the San Francisco Bay Area’s down-and-out returns in a meandering tale of honor and betrayal among Viet Nam vets. Vet-turned-lawyer Claude McCutcheon (Cutdown, 1997) is just beginning to enjoy good coffee, colorful hard-luck cases, and the good-and-cheap Bay Area restaurant scene when Earl, the four-year-old son of an army buddy McCutcheon hasn’t seen in 30 years, arrives unannounced at McCutcheon’s book-lined walk-up. McCutcheon doesn’t need a threatening visit by grizzled Barton Jones, another Viet Nam vet now employed as a tough-talking security chief for a Sentinel Microsystems, a Silicon Valley company, or the snooping by the beautiful-yet-competent FBI Agent Rita Johnson to figure out that Earl’s father, Jesse Hamilton, has gotten himself in trouble. When McCutcheon blows away an armed intruder, he figures that his apartment is no place for an impressionable youngster. He parks the child with a former client, then searches for Hamilton among the burned-out, drug-addicted vets who used to know him. A phone call to Barton Jones’s smarmy boss, J. Watson Mellon, reveals that Hamilton has stolen a computer disk with high-tech secrets on it—and that a handsome reward awaits its rescue. McCutcheon isn’t much concerned with rewards, of course, especially after another Viet Nam buddy is mistaken for McCutcheon—and killed. Meanwhile, Miller’s slow-paced plotting isn’t half as interesting as the Bay Area ex-cons, transvestite restauranteurs, and shady others of McCutcheon’s world. After touring this world, Agent Johnson falls hard for McCutcheon when she glimpses his first edition of T.E. Lawrence. She even lets him give her tips on how to shoot a handgun, tips that later become important. More assured as a storyteller, though perhaps too comfortable with tired genre conventions, Miller has his best book yet in what appears to be a series about the peculiar pathologies that have turned some vets good and others very, very bad.