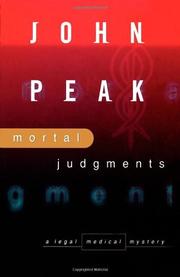 by John A. Peak

A woman dies under the surgeon’s knife, and nobody is sure why. Nevertheless, her husband rushes for a judgment. Pressure builds on the young surgeon to let his insurance company settle, but he won’t. Instead, he does that high-risk thing—he stands on principle. He’s thought about his performance, analyzed it hard, and now refuses to take the safe way out. So beguiled by the rarity of this act is Vicki Shea, powerhouse San Francisco medical malpractice lawyer, that she, too, digs in her heels. But inimical forces are ranged against them, and soon Vicki discovers just how serious they are. Driving along the freeway after accepting the case, she narrowly escapes death when a concrete block is hurled at her car. Then two pathologists hired by her for their expertise are brutally murdered. Vicki is frightened, of course, but she won’t quit, despite the urging of friends who view principles as abstractions, life as for real. She assembles her case steadily, and though it’s far from iron-clad, she believes in it. In a stirring closing speech, she insists on the distinction—easy to blur—between malpractice and death (even unexpected death) in the operating room. A woman died, a good woman, she acknowledges, but how can it follow from this that all surgeons are killers? Peak’s best so far (Blood Relations, 1997, etc.), thanks to an engrossing and vivid cast, particularly the brainy, flinty, flirty, ever-honest Vicki, who in spite of her frailties (or probably because of them) is quintessentially lovable.