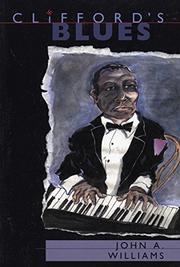 by John A. Williams

A first novel by journalist Williams (If I Stop I—ll Die: The Comedy and Tragedy of Richard Pryor, 1991), portraying the travails of a black musician imprisoned in Dachau. Prison camps have hardly been places, conventionally, to catch up with one’s diary. Here, though, the solitude, boredom, and seemingly endless stretches of they time serve to make our central character quite introspective indeed, even though this person is the gregarious and feckless as Clifford Pepperidge. A gay pianist from New Orleans, Cliff made the scene in Harlem in the 1920s, playing alongside the likes of Ellington, Ma Rainey, and Miss Bessie Smith. When a Russian impresario decides to take a jazz band on tour through Europe, Cliff jumps on board and eventually winds up in Berlin, where he becomes one of the stars of the cabaret years of Weimar. Arrested during one of the Gestapo’s periodic roundups of gays, Cliff is taken (in spite of his US citizenship) into “Protective Custody” and sent to Dachau. Upon arrival, he’s recognized by Dieter Lange, a gay SS officer with a secret passion for jazz who used to frequent Cliff’s nightclubs. Dieter makes Cliff his calfactor (houseboy) and gets him special treatment in exchange for sex and music (all the other Nazis apparently love jazz as much as Dieter, and Cliff helps Dieter win favor with the brass by playing at parties for them). And since Dieter’s young wife Anna is (not surprisingly) far from satisfied by her husband, it soon becomes part of Cliff’s duties to take care of her as well. How much degradation is enough for a man? Cliff has no illusions: “Good men who are strong don—t last here.” But if you want to make it, you can put up with just about anything—and Cliff’s diary shows how he does just that. A worthwhile variation on a grim and lamentably familiar story. The tone veers toward the disconcertingly light, but, even so, things remain a long way from Hogan’s Heroes.