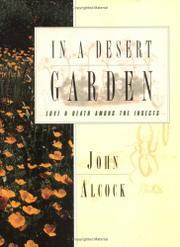 IN A DESERT GARDEN

Love and Death Among the Insects

A spirited primer in Sonoran Desert ecology, cloaked in a memoir of gardening. To judge by this graceful little study of insects and desert plants, Alcock (The Masked Bobwhite Rides Again, 1993), a zoologist at Arizona State University, is a suburban neighbor's nightmare. First, he replaced his Bermuda-grass lawn with gravel, cacti, and succulents to replicate the look of the desert before humans remade it. Next, he festooned his yard with cowpies carefully selected for size, weight, and dryness, ``the cräme de la cräme of termite chow, as far as Gnathamitermes are concerned,'' whereafter that voracious insect would find hospitable quarters in his domain. Then he seeded his property with flowers to attract a flotilla of winged and crawling creatures, ``carpenter bees and globe mallow bees, brittlebush aphids and milkweed aphids, these and many other insects.'' Thus equipped with a back-door laboratory for ecological studies, Alcock spent the next few years observing what happened; his observations provided him with the field notes from which this book is made. Alcock fills his pages with asides on the insects he has studied for so long at close hand. We learn, among other things, that female praying mantises have gotten a bad rap as spousal murderers; rising to their defense, he observes that ``the extent of female consumption of males during copulation had been greatly exaggerated.'' We learn as well that aphids are to be prized, the occasional loss of a rosebush or milkweed plant aside, for their marvelous properties: They reproduce ``without the curious beings we call males'' and otherwise develop and mutate in unexpected ways. Ever original, Alcock encourages readers to view the desert with new eyes through this fine contribution to arid-lands literature.