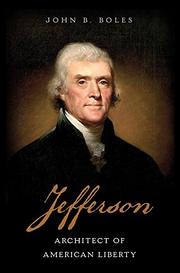 by John B. Boles

A fully fleshed biography of Thomas Jefferson (1743-1826) that emphasizes his creative paradoxes and accomplishments.

As presented by Boles (History/Rice Univ.; University Builder: Edgar Odell Lovett and the Founding of the Rice Institute, 2007, etc.), Jefferson, “in all his guises,” displayed an industrious commitment to public service in the young republic, passionate devotion to personal relationships and copious letter writing, and dedication to his state and Monticello homestead. Above all, Jefferson possessed enormous intellectual curiosity, starting from his studies of philosophy and science at the College of William and Mary, and later law, continuing through his years living in Paris as commissioner and later secretary of state, and climaxing in his creation of the University of Virginia. Boles elegantly delineates the milestones of Jefferson’s life and the expression of his mind—e.g., in the writing of the Declaration of Independence, in which, “with consummate artistry, [he] summarized years of thinking and political philosophizing in about two hundred words.” A man of his time, Jefferson was steeped in the revolutionary ideals of the Enlightenment, such as the need for religious tolerance and the belief (ultimately struck from the Declaration) that slaves “had rights identical to those of the rest of the American people”—and yet he notoriously held on to his own slaves. Boles treats Jefferson’s relationship with his young slave Sally Hemings with the same discretion that Jefferson did, though after she bore him five children, the secret was certainly well-known, both at Monticello and publicly. Curiously, Jefferson never traveled farther than 50 miles west of Monticello, yet as president, he was obsessed with America’s western expansion and famously secured the Louisiana Purchase. The author devotes a chapter to Jefferson’s “Living with Paradox” and reminds readers not to judge the sage of Monticello by 21st-century terms. Still, regarding emancipation, “in no other aspect of his life does Jefferson seem more distant from us or more disappointing.”

A stately, knowledgeable study jostling for space among the groaning bookshelves devoted to the third president.