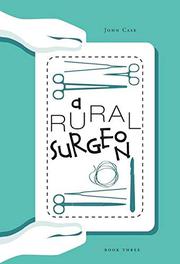 by John B. Case

In this third installment of a memoir, an English doctor and his family adjust to life in Canada.

Case, his wife, and their young children immigrated to Alberta in 1970. They quickly got a taste of this new rural setting, as their arrival in Canada was in the midst of winter. The family didn’t have clothing to accommodate the blistering minus-35-degree Fahrenheit temperature (or money to buy more) and generally stayed inside their town house. But Alberta was different from their England home in many other ways, from diverse cultures and languages to the food. Alas, black pudding was no longer a breakfast option. One of the family’s earlier troubles was monetary; Case, who earned a surgical specialist certification in Canada, initially made less than he did in England. But the Cases became financially stable once he opened an independent practice, and they settled into a new home. The vastness of Alberta provided the surgeon with a variety of patients and injuries, largely due to heavy industry and icy roads that caused numerous accidents. And as it turned out, the family’s original plan of “a couple of years” in Canada was extended. In this volume following The Surgeon’s Apprentice (2019), Case couples descriptive prose with welcome humor. Some of his adjustments, for example, included coping with slang (the British phrase knocked up is an early morning call). At the same time, he cites and scrupulously details myriad surgical cases and procedures. In fact, readers who are squeamish watching surgeries on TV may react comparably to the book’s graphic passages. Despite the family’s hardships, the work is upbeat, portraying Canada as a serene, snowy place with good people. Further enhancing Case’s memoir is intermittent poetry that’s earnest and sometimes funny, like a piece warning drivers to watch the road—not “ogle” the snowy owl.

An amusing and genuine account of the challenges a surgeon faces in a new country.