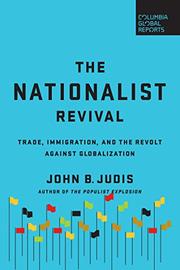 Trade, Immigration, and the Revolt Against Globalization

by John B. Judis

The longtime political journalist limns the rise of Trumpian nationalism in the face of a bewilderingly global world.

The word “cosmopolitan” is freighted, but Talking Points Memo editor at large Judis (The Populist Explosion: How the Great Recession Transformed American and European Politics, 2016, etc.) does not hesitate to put it to work in characterizing the current political rift between left and right not as a battle between nationalists and liberals but as one between nationalists and cosmopolitans, namely metropolitan or college town–dwelling elites who own a passport, have graduated from good schools, and make up the upper rungs of the professions. “When Trump supporters blame America’s ills on liberals,” writes the author, “they are generally talking about cosmopolitans.” The words aside, the central point is that Trump’s left-leaning opponents tend to favor open borders, his supporters walls and immigration bans. Trump was able to leverage these worldviews—social psychologies, even, to trust Judis—to present the case that Americans were being robbed of their patrimony. “He had been complaining since the late 1980s,” notes Judis, “about America losing out on trade to Japan and then China and being taken advantage of by its allies in Europe.” After surveying its history, the author argues that some form of nationalism is useful as a “framework within which citizens and their governments deliberate about what to do—and justify what they have done." In this regard, a nationalist ideology need not necessarily be bigoted or exclusive; Judis argues that nationalism is “an essential ingredient of political democracies” while allowing that it can also underlie authoritarianism and fascism. Against this background, the author proposes that Trumpian nationalism, a zero-sum game in which there are only winners and losers, need not be the only alternative to an internationalism by which nations cede sovereignty, as with the European Union. Indeed, he suggests, international cooperation is best effected by sovereign nations at whose helm is a single great power, as with Great Britain in the 19th century and—well, perhaps China in the 21st.

Wonkish but of broad interest to students of geopolitics, international affairs, and economics.