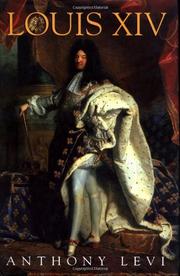 A slow-moving, thorough life of the French monarch by a noted literary historian.

Levi extends the narrative begun in his Cardinal Richelieu (2000) to the son of the weak-willed, out-of-touch Louis XIII. It’ll be tempting for some to read XIV’s life as a 16th-century analog of the current American president’s, for Louis was callow and proud of it. Writes Levi, he “is reliably thought to have disliked studying from books” and acquired only a little knowledge of Latin, the language of learning and—tellingly—international diplomacy; moreover, on attaining the throne, he surrounded himself with his father’s cronies, many of whom had grown up under the long shadow of Cardinal Richelieu, and spent a lot of time governing from the distance of Versailles, which he imagined to be a sort of typical village. The French people were dispirited by his myriad missteps in office, but, for all that, “his charm could inspire popularity in the midst of the anguish his policies were inflicting on them”—policies in part caused by the monarch’s “inclination to the pursuit of military glory as conferring or demonstrating the highest form of human honor.” Yet Louis XIV was more than an ingénue, and by Levi’s account the Sun King, who half believed in his own divinity, sought to perform at least some good deeds to lessen the suffering of the most unfortunate of France’s people. Levi paints a thorough warts-and-all portrait of Louis, though the prose is sometimes thick and plodding, as with this representative aside: “He was in the 1680s still trapped in the role in which the painters and sculptors of the baroque had cast him, exaggerated, magnified, distorted to maximum tension in the interests of inspiring awe, status, and grandeur, in as strongly lit and unachievable and certainly as unsustainable a pose as any to be found in a van Dyck painting.”

General readers may prefer to dip into the pages of Laclos or Hugo for a taste of the time. Levi’s take is mainly for specialists.

BEFORE VERSAILLES
by Karleen Koen
Nonfiction