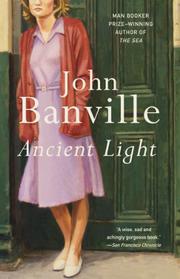 A novel that traps the reader inside the mind of the narrator, a reflective but not very perceptive actor, as his self-absorption turns from the human condition, the passage of time and the creative memory to, obsessively, his teenage sexual initiation with the mother of his best friend.

One’s appreciation of the latest from the award-winning Banville (The Sea, 2005, etc.) largely depends on patience with the protagonist, for the entire novel takes place inside his mind, a mind prone to distortions of memory and little insight into anyone, least of all himself. For Alexander Cleave, a semiretired stage actor improbably cast as the lead in a film (a bio flick portentously titled The Invention of the Past), “the past seems a puzzle from which the most vital pieces are missing.” A half-century earlier, when he was 15, he had a summer-long affair with his friend’s mother, Mrs. Gray. He seems to have little idea how it started, why it persisted and whether the two of them were even particularly attracted to each other. She had just marked her 35th birthday and had lost a baby, though the narrative mentions these only in passing. It would undoubtedly be a very different novel if Mrs. Gray were the protagonist, a narrative which Alexander might not even recognize as his own life. “I do not know what anyone thinks; I hardly know what I think myself,” he admits. He and his wife (who barely figures in the novel) seem like little more than strangers to each other, their relationship irrevocably damaged by the suicide of their mentally disturbed daughter a decade earlier. His debut film experience weaves together various strands from his life and memory, yet he remains (as do we all?) “a Crusoe shipwrecked and stranded in the limitless wastes of a boundless and indifferent ocean.”

Banville writes beautiful sentences, while recognizing the limits and deceptions of language, in a meditation on themes that he has better explored elsewhere.