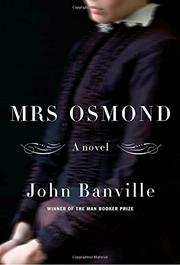 A sequel to The Portrait of a Lady that may well delight fans of that Henry James masterpiece and leave other readers bemused by the contemporary work’s 19th-century sensibility.

When last seen in Portrait, Isabel Osmond, nee Archer, has left London to return—inexplicably or inevitably—to Rome and her psychologically abusive husband, Gilbert. In this sequel, Isabel delays that confrontation for almost two months as she seeks counsel from friends and ponders her shortcomings, dead marriage, and the sort of freedom she desires. There’s a comically appalling vegetarian dinner with a suffragette acquaintance, featuring “uncompromising greens,” a late-night talk-a-thon with her bluestocking friend, Henrietta Stackpole, and a soiree at the Paris home of an American heiress, where Isabel encounters nemesis Serena Merle, her husband’s partner in more crimes than James set forth. Isabel also withdraws “a very large sum” in cash from her London bank and carries it about in a leather satchel. She misplaces it and retrieves it, only to have Banville (The Blue Guitar, 2015, etc.) conceal its whereabouts for much of the book until it comes to serve the overarching theme of freedom. The disappearing cash is one of the subtler devices (cliffhangers end several chapters) he uses to bring some tension to this slowly unfolding drama, in which Isabel’s Grand Detour before the reckoning with Gilbert—London, Paris, Geneva, Milan, Florence, Rome—offers most of the action: boarding a train, ferry, or horse-drawn carriage. Fans of Henry will find the writing persuasively Jamesian in its voice and diction, its syntax less labyrinthine. Fans of John should deem it marvelously Banville-an in its observations, humor, and insight—though they may wonder at this literary diversion by a writer who already plies the pen name Benjamin Black.

A sequel that honors James and his singular heroine while showing Banville to be both an uncanny mimic and, as always, a captivating writer.