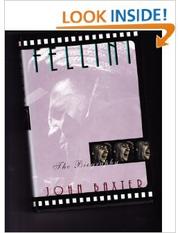 An annoying, superficial, and spiteful reductionist biography of the late Italian filmmaker. Baxter (The Hollywood Exiles, 1976) is more intent on dashing the self-promulgated ``myth'' of Fellini (192093) than on the assemblage of a creditable life story. Presented a Lifetime Achievement Oscar shortly before he died, the Italian director was a consistent prize winner in Hollywood, at Cannes, and elsewhere with such landmark films as La Strada (1954), Nights of Cabiria (1957), La Dolce Vita (1960), 8´ (1963), and Amarcord (1973). Baxter provides detailed synopses of most of the films and delves into such background material as the development of the screenplays, casting, and selection of the crew. He discusses Fellini's childhood in Rimini and youth in Rome; his early exposure to cinema and some of his influences; his career as a cartoonist/journalist; his 50-year marriage to actress Giulietta Masina (``a relationship,'' Baxter claims, ``more like brother and sister''), and his supposed jealousy of and resistance to her emerging stardom following La Strada and Cabiria; his lordly treatment of those who worked for him; and his tumultuous association with producer Dino de Laurentiis. The author also catalogues, with little amplification and plenty of innuendo, ``a parade of sexually charged images'' from Fellini's childhood and dreams, which often became manifest in his films. Throughout, there is a persistent, pointless sniping. Baxter hints that Fellini bribed his high school teachers. We learn that he didn't really run away with the circus. He notes that as a 1930s schoolboy Fellini was photographed ``smartly turned out'' in his youth group uniform, implying that this somehow negated his adult anti-fascist beliefs. Baxter goes to great lengths to point out that Fellini's distant father, dominant mother, and ``a sensitive, creative disposition'' are ``often associated with homosexuality, but there's no evidence of physical affairs.'' Utterly lacking in artistry or insight—an unbearably long, trashy tabloid article. (24 pages of b&w photos, not seen)