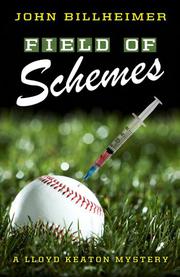 A sportswriter with a gambling problem tries to help a trainer escape indictment for steroid abuse.

Dale Loren used to be a major league pitcher. After he blew out his arm, he found work as a trainer for the Meckenburg Mammoths, Cleveland’s AAA team. Accustomed to free access to performance enhancement drugs that are now illegal, the minor leaguers pester Dale for steroids until finally, he mixes a concoction of cold cream, sunblock and lemon juice for hot prospect Sammy Tancredi. Whether it’s the weight training Dale insists on to explain Sammy’s bigger muscles or just a placebo effect, the young player’s hitting explodes, catapulting him into the majors. Once there, he tests positive for steroids and names Dale as his supplier, landing the trainer in the middle of a congressional probe of steroid use in baseball, with a grand jury indictment the next stop. Lloyd Keaton, who’s slammed U.S. Representative Bloodworth in his sports column for his fixation with steroids, sets out to find evidence to exonerate Loren. But after losing a huge bet to Little Bill Ellison’s West Virginia syndicate, Keaton finds himself in the crosshairs. And when Dave Bowers, a bookie who lost even bigger to Little Bill, is pushed down an elevator shaft in his wheelchair, Keaton knows that it’s just a matter of time before the West Virginia boys catch up to him, too. Can he find evidence to clear his pal before the syndicate cleans his clock?

Like his Owen Allison series (Stonewall Jackson’s Elbow, 2006, etc.), Billheimer’s new franchise emphasizes local color in small-town America as its heroes prove to be their own worst enemies.