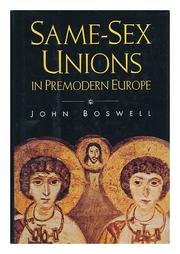 Boswell (History/Yale; Christianity, Social Tolerance, and Homosexuality, not reviewed) convincingly establishes that, from ancient times to the 18th century, throughout Christian Europe, same-sex union rituals honored a form of ``gay marriage.'' Working from church manuscripts, mainly in ancient Greek, that describe the ceremonies, Boswell carefully traces the historical context in which these practices occurred, exploring premodern beliefs about love and marriage, both gay and heterosexual. Past historians encountering these manuscripts have usually interpreted the same-sex ceremonies as honoring a spiritual bond or friendship, rather than a marriage equivalent. Boswell argues these readings overlook the ceremonies' striking resemblances to heterosexual nuptials in terms of the vows as well as the use of symbolic objects such as crosses, veils, crowns, and sometimes swords. In addition, both heterosexual and same-sex ceremonies usually involved the joining of right hands. He maintains that when other historians have neglected these parallels, they have done so out of a combination of homophobia and fear. Same-Sex Unions represents extraordinary scholarship, copiously detailing premodern rituals, laws, and value systems. The footnotes are as absorbing as the text, often providing crucial context or opposing viewpoints. Boswell is admirably attuned to the elusive subtleties of language and the dilemmas of translation, especially when it comes to matters of the heart; we are apprised of the multiple meanings and possible nuances of Greek words for friend, lover, kiss, brother, companion, etc. Appendices contain the original ceremony texts, accompanied by Boswell's translations. Also included is a translation of ``The Passion of Serge and Bacchus,'' a story of love between two late-third-century Christian martyrs, which was frequently invoked in same-sex union ceremonies. Well worth the attention of anyone with a serious interest in the social and spiritual history of love and marriage.