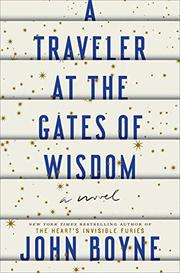 A TRAVELER AT THE GATES OF WISDOM

This challenging, time-traveling epic looks at a family’s travails in different eras and locales around the world.

With his 12th novel for adults, Irish writer Boyne tracks one family, more or less, through two millennia and over much of the globe. Gird your loins: This is busy and potentially confusing stuff, teeming with treachery, flaying, famous figures, and “the marriage act.” As the book begins, in Palestine,  1 C.E., the unnamed male narrator’s father, a Roman soldier, heads off to slaughter innocents at Herod’s behest. Chapter 2’s segue suggests the same narrative, but the family members have different names and live in Turkey,  41 C.E. So it will go, for 50 chapters, as the family members and their crises slowly evolve in ever new settings enriched by historical details and cameos from Attila, Michelangelo, and Lady Macbeth, inter alia. It’s a kind of mashup of the History Channel and soap operas, with the cast facing enslavement, rape, gay bashing, murder, natural disasters, a missing brother, and lost wives. The narrator, along with an artistic bent, has a nasty side, and the latter part of the book will be dominated by his drive for vengeance against a crippled cousin. With Chapter 51, the final crisis arrives in the U.S. on election night 2016. Boyne is a gifted storyteller, but the language here can be stilted, sometimes comically so: “the unexpected engorgement beneath my tunic.” His theme, with all its variations and repetition, boils down to plus ca change: “[T]he things that surround us may change, but our emotions will always remain the same.” Yet an epilogue set in the near future suggests what it might take to get us off our hamster wheel.

An intriguing work whose ambition and richness should, for many readers, overcome some flaws.